The Exorcism of Clarita Villanueva : A true Pinoy Horror Story.

Clarita Villanueva, a 17-year-old Filipina girl, had known a life of tragedy. She did not remember her father. She did not know if he had died or had deserted her mother.

Her mother was a spiritist and a fortune teller by vocation. The girl was brought up watching her mother holding seances, communicating with the dead, and using clairvoyance to predict to sinful people what they could expect in the future. Her mother took money from people for her services, and then laughed at them behind their backs. To her it was all just a game, a means of making a living by duping unsuspecting and gullible people.

When Clarita was still very young, about twelve years old, her mother died. Since she did not have any immediate family to take her in and care for her, she became a vagabond. She fell into the hands of harlots and at the tender age of 12 was selling her body as a prostitute. The harlots taught her how to handle men, how to get money for her services.

Clarita worked her way up from her island home to the capital city of Manila. The big city was a hiding place, a center of money and vice for her business. The local harlots became her teachers and she learned the night life in the big capital city. In Manila there were more men to seduce. By the time she was 17 years old, Clarita was frequenting the bars and taverns of Manila, living the ‘gay life’ by soliciting men for harlotry.

But one morning at 2 a.m. on the streets of down-town Manila, Clarita made the mistake of offering her services to a plainclothes police officer. The policeman called for a vehicle and Clarita was taken to the ancient Bilibid Prison, used as the city jail. Bilibid has been a prison for over 300 years. It was built by the Spanish and used by the Americans, the Filipinos, and the Japanese as a prison and a place of torment.

Two days after Clarita was incarcerated, there struck the strangest phenomenon to ever hit Bilibid Prison in its 300-year history. This young harlot was bitten severely on her body by unseen and unknown alien entities. There were two of them – a huge monster-like spirit and a smaller one. They sunk their fangs and teeth deep into her flesh making deep indentations. They would bite her neck, back, legs and arms simultaneously. Blood flowed, mostly underneath her skin, from the bites. The 17-year-old girl screamed in horror and fainted. 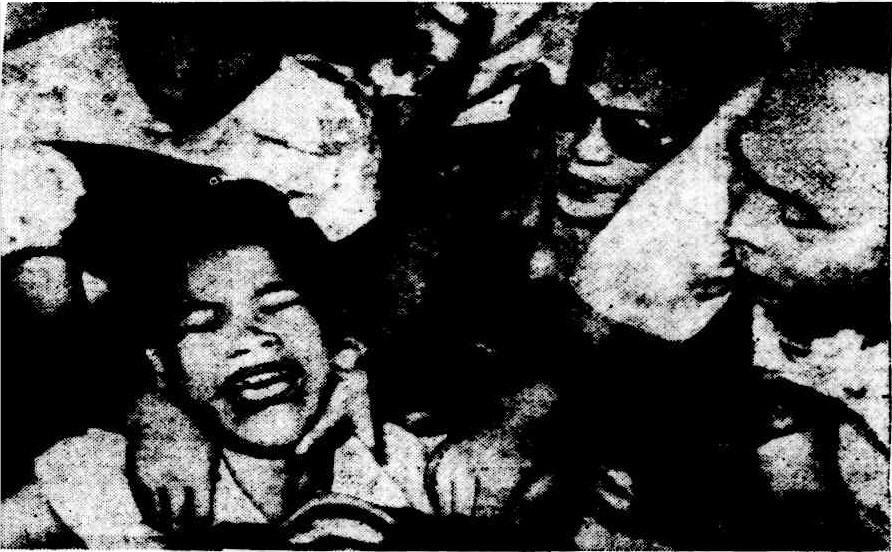 The guards and medics heard the commotion and came running to the women’s division of the prison. The other female inmates pointed to the writhing, tormented girl on a cot.

The girl was taken to the prison hospital for observation and treatment where all the doctors declared that they had never seen anything like it.

These strange demonic bitings began to occur daily, baffling all who saw it. Dr. Lara, the prison physician, appealed for help through the media and permitted many to view the strange phenomenon. Filipino, Chinese and American doctors, university professors, and other professionals were called in to analyze the situation.

The news media soon caught wind of the occurrence and sent reporters out to investigate. The newspapers, radio stations and magazines found it their kind of story and began to publicize it. Even the cartoonists were soon drawing pictures of the entities from Clarita’s descriptions, as the bitings continued day by day. The UPI and other world news services began to report the phenomenon worldwide.

In my travels throughout the world, I have not been in any country in which the newspapers did not give this story front-page coverage. Switzerland, France, Germany, England, Canada, the United States – everywhere this strange phenomenon was front-page news at the time.

One doctor accused the girl of putting on an act in order only to get publicity. Clarita gazed at the doctor. With her snake-like eyes she said: ‘You will die’. He didn’t feel anything at the moment, but the following day the doctor expired without even getting sick. He simply died. Fear struck the city when that news was spread about. The girl was not only a harlot, they said, she was also a witch who could speak curses upon human beings and they would die.

The chief jailer had a confrontation with the girl. He had kicked her for something she had done wrong while rebelling against him. Clarita looked at the jailer in cold, inhuman hate and said: ‘You will die!’ Within four days the man was dead and buried, the second person to fall victim to her curse.

I walked into Bilibid Prison just as the funeral cortege moved out. The prison guards had paid their last respects to their chief. Dr. Lara, the chief medical officer, and his staff were deeply concerned. They had a prisoner who certainly was not crazy, but who was being wildly attacked by unseen entities and being bitten deeply on all parts of her body by creatures no none else could see. I have never seen such a fearful and perplexed group of people as those I met in that prison that day. They were afraid that this thing would kill them as it had the two others who dared cross it. It was their responsibility to do something for the girl, yet they had no earthly idea what to do about the situation. It was beyond their medical knowledge.

Who were these alien entities? The large one, Clarita said, was a monster in size. He was black and very hairy. He had fangs that came down on each side of his mouth, plus a set of buck-teeth all the way around. The doctors verified her description by the teeth marks on her body: buck-teeth solid, all the way around the bite, rather than sharp teeth in the front.

The smaller entity was almost like a dwarf. He would climb up her body to bite her upper torso. Both of these spirits liked to bite her where there was a lot of flesh, like the back of her leg, the back of her neck, the fleshy part of her upper arms. They would bite deep into her, leaving ugly, painful bruises.

Dr. Lara and his medical assistants called in all sort of observers, medical doctors, surgeons, psychiatrists and professors from the Far East University and the University of Santo Tomas. No one had ever witnessed such strange and demonic behavior. Nor did they know any solution to the problem. They all wondered who would be the next victim of her curse.

Dr. Lara and his staff sent out word everywhere: ‘Come and help us. Please help us’. They received 3,000 cables from heathen countries suggesting possible cures, but not one from a Christian country.

Do you see how we Christians have been asleep? The word went out over the world. Three thousand telegrams came in, mostly from Japan and India, telling them what to do with an invisible biting monster. But not one Christian nation had any solution to the problem.

They asked in Manila for somebody to come and help. The only group who turned up were the spiritists who said it was John the Baptist biting her. The officials asked the spiritists to leave.

I was the next one to come upon the scene. After three awful weeks of this torture, a radio reporter came to Bilibid and taped a session while the doctors were violently struggling with the demonized harlot. The reporter immediately released his story on a local radio station, just after the 10 o’clock news.

This was the first I had heard of the hell in Bilibid Prison. The newspapers had given it front-page coverage, but I was too busy building a church to read the newspapers. That’s what the devil would like for us to do, to get so involved in taking care of our own little mission that we allow him a free rein to do anything he wants to do.

When the Bible says to be vigilant, this is what it means; to see what the devil is doing in the world; to keep up with him; to resist him and fight him in whatever he might be doing.

I stayed up all night praying and weeping before the Lord. I was interceding for the city, for the girl and for myself. I was living in a city that had a great need and I was not helping to meet that need. I was so busy putting up our church building and doing my own thing that I was not involved in the tragedy of Bilibid. The next morning God spoke to me and told me to go to that prison and pray for the demonized girl. I did not want to go, but God assured me that He had no one else in the city to send. Therefore I went.

Because I was a foreigner in the Philippines, I went to the mayor’s office and asked permission to see Clarita. He granted me his permission but warned me that several people had been injured by the girl and that two had been cursed and were dead. I went with the understanding that I would not sue the government if I was hurt, and that I would not complain if mistreated.

When I arrived at the prison, the head doctor of six physicians, Dr. Lara, was skeptical of this foreign minister, but he finally permitted me to see the girl.

Clarita was brought into a special room where I was waiting with a large group of news reporters, foreign members of the press, university professors, and medical doctors, who had been invited by Dr. Lara.

As Clarita was being led into the room, she looked at them and said nothing, but when she saw me she screamed violently: ‘I hate you!’ Instantly I inserted: ‘I know you hate me. I have come to cast you out’.

That was the beginning of the confrontation. There was a raging battle with the girl blaspheming God the Father, God the Son, and God the Holy Spirit. Her eyes were burning coals of fire and full of hate. I commanded the evil spirit to loose her. After a three-day confrontation with the devil in her, the miracle of God came upon her. She relaxed, smiled, and said: ‘He’s gone’.

The local newspapers, magazines and radio told the story. One headline read: ‘He dies; the devil is dead!’ Another one said: ‘Devil loses round one’.

Dr. Lara became so excited he took me over to the office of the mayor. When he walked into the office, he said: ‘My God, mayor. The devil is dead’.

I said: ‘Mr. Mayor, Dr. Lara may be a good doctor, but he’s a poor theologian. The devil is not dead. The girl I came and talked to you about yesterday is healed’.

From: Lester Sumrall, Alien Entities. A look behind the door to the spirit realm, printed in the USA by Whitaker House (PA), 1995, pages 131-138

Maymomoo!™ is a site that features a collection of True Philippine Horror Stories, contributed by Filipinos worldwide, based on their personal encounters. Maymomoo! ™ is derived from two Filipino words "May" and "Momoo". "May" means "there is" and "momoo" which means "ghost".

Basically Maymomoo! ™ is an unsponsored site, that grows with audience participation. Donations, submissions and new information help the site to grow. It started to be online in 2006, and was developed by JAPworxs™. This site was bring into reality due to a ghost encounter that is believe to be true by the developer or the administrator of this site.

This site is developed and maintained by JAPworx™. The contents of this site is reserved for the use only of Maymomoo! ™

If you have any comments, suggestions or any other concerns. You may e-mail us at admin[at]maymomoo.com.